After creating Unessay 1, I was inspired to create my own text art project as part of my work on Unessay 2. Graffiti, political art, propaganda and protest art were all subjects I considered exploring in Unessay 1, but did not reach. Initially, I considered featuring artists known to incorporate text in these forms of street and protest art. However, I decided to go beyond featuring artists (although Unessay 2 does feature artists in the context of my project) to creating an original art project that utilizes text as an important element of expression and meaning.

As I was viewing the many examples of street art–including famous graffiti artists and political artists–I was mesmerized by the graffiti and other art found on the existing sections of border fence between the US and Mexico. I looked for this border art because of the importance of the border to the new Trump administration.

In his National Geographic Article titled “A Border Wall Already Exists in Some Places. We Visited It,” Daniel Stone and photographer James Delano present haunting photos of sections of the more than 1,000 miles of existing border fences, which are piecemeal and often constructed of varying materials.

(Photos by James Delano). I found the images of these makeshift fences snaking through the harsh California desert compelling and though provoking. In the first image (and the second in the background), the fences are labelled with hand painted white numbers. Although these numbers are likely used to alert Border Patrol to the location of intrusions, the numbers also convey a sense of scale and time as the fence marches across the southwestern United States. Similar numbers serve as a prominent textual element in my project.

Prompted by Daniel Stone’s article, I used Google Earth to explore other border regions and stumbled on a surreal setting at the border between San Diego and Mexico where a ragged border fence juts out into the Pacific ocean. On the Mexico side of the border fence, a vibrant community is found. On the US side of the fence, a sort of no-man’s land appears. The contrast between the two sides of the border at the edge of the Pacific, coupled with the graffiti and street art at this site informed and inspired my project.

The following drone video shows this location and its oddity from several perspectives:

The images below also provide a sense of the San Diego/Tijuana border at the Pacific Ocean and show the border fence ending in the surf of the Pacific ocean.

This location provided the creative spark for my text art project. The attempt to separate nations at the edge of the endless Pacific ocean seemed like the perfect place to explore the political, social, cultural and symbolic issues related to the proposed Trump Border Wall. An artistic examination of the Trump Border Wall also provided an opportunity to explore larger issues about authority, propaganda, political coercion, protest, resistance, time, and history.

Our nation finds itself within the first 100 days of the Trump administration. Monday, April 17th is the 88th day of the Trump Presidency. Trump’s most prominent–and perhaps controversial–campaign promise was to build a massive border wall on the US/Mexico border to eliminate or greatly reduce illegal immigration to the US from Mexico.

My text art project, titled “The Trump Twitter Wall,” is an interactive digital model of the proposed Trump Border Wall that starts several hundred feet in the surf of the Pacific ocean and runs east through along the San Diego/Tijuana border for approximately 4,500 feet. The impact of just this 4,500 feet section of wall on the border region is visually stunning, and when one considers this section represents less than 0.05% of the total length of the wall, the scale of the proposed wall becomes apparent.

Although the physical scale of the proposed wall across the southern California landscape is an element of my project, the primary focus of my project recognizes that walls–especially walls designed to keep people apart–become a canvas for expression, art, graffiti and political speech. My project assumes that the art that would appear on the US side of the wall would be different from the Mexico side.

On the US side, control of the wall by the US Border Patrol would limit graffiti and other expressive content. In contrast, the Mexico side of the wall would become a canvas for graffiti, protest art, and political speech.

I imagine the US control of the wall manifested as a type of monument to Trump’s political speech, which is most frequently contained in his numerous tweets. Since taking office, Trump has published more than 400 tweets. In my project, the proposed Trump Border Wall becomes the “Trump Twitter Wall” where his tweets are transformed into a monument to conservative ideals, generally, and Trump’s ideas, specifically. When one think of monuments of memorials, one imagines places like the Lincoln Memorial where Gettysburg Address is engraved in stone for future generations. My project takes the fleeting, fast paced, and sometimes impulsive nature of Trump’s tweets and makes it permanent on the massive panels of the Trump Twitter Wall. The project also asks in what ways Trump’s words become a metaphorical barrier to global peace, understanding, and cultural exchange of ideas?

Each 30′ by 30′ panel of the wall is engraved with one of Trump’s tweets, starting with the first tweet of his presidency and continuing with each one thereafter. His words are held to account in the solidity of the wall and stored for the judgment of future generations. I number each tweet starting at “1,” to evoke the numbers on the existing border fence that now wanders across the southwest US.

On the Mexico side of the wall, I contrast the authoritarian control of the message and the monument with the chaotic and free nature of expressive speech. The Mexico side is adorned with graffiti, protest art, and political art–all of it real art found on the existing Mexico side of the border fence (and from other sources). Standing just three feet away from the larger than life Trump tweets, the Mexico side wall art stands as counterpoint too and protest of Trump’s speech, which has become synonymous with 140 character sound bites.

Although my other blog postings discuss the themes of my project, I leave it to the viewer to explore the work before reading these postings. Ideally, the viewer can download the SketchUp model or the Google Earth model and explore these in the appropriate platforms.  SketchUp and Google Earth are free downloads. The Sketchup version of my model can be explored by opening the SketchUp file from the program. The Google Earth file is opened within Google Earth, but because of the file size may take one or two minutes to load. 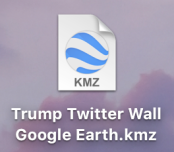 The next video show a quick fly-by on the US side of the Trump Twitter Wall:

And finally, these two videos present a slower fly-by of the US and Mexico side of the Trump Twitter Wall and allow for closer examination of Trump’s tweets and the Mexico side protest art:

I have also prepared three slideshows from exported images created in my Trump Twitter Wall model. The first shows images from the video tour and provides an alternative means of exploring the project. The second slideshow shows the wall panels on the US side of the Trump Twitter Wall that display Trump’s 141 presidential tweets from January 20, 2017 through February 11, 2017. The third slideshow shows the art pieces–many of which are text art–selected for the Mexico side of the wall.

I hope the viewer finds the Trump Twitter Wall engaging and thought provoking. With more time (and perhaps better software), I would have liked to provided a function that allows people to post their own art on the Mexico side of the wall and have those images updated in real time on the Trump Twitter Wall. I intend to explore that possibility.

Follow Beyond the Words: Text in Art on WordPress.com
The Trumplandia Review
James Harrington's Blog of Geek and Writing

All Things Writing and Geek, in one neat little blog!

"It is the duty of every man, as far as his ability extends, to detect and expose delusion and error"..Thomas Paine

A lot from Lydia

the passions of a science fiction writer

A Reader's Guide to Orthodox Icons

Oh! Take a shit, read a story. - My Mother on flash fiction

Beyond the Words: Text in Art

Exploring the Use of Text in Artistic Mediums